Status of cryo-electron microscopy in the AMED BINDS project and introduction of novel sample preparation method.

Towards automated and remote cryo-electron microscopy to accelerate drug discovery.

Structural information on target proteins is essential to accelerate drug discovery research. In recent years, in addition to conventional X-ray crystallography and NMR methods, single-particle analysis using Cryo-EM has made remarkable progress. It has many advantages, such as no crystallization required, small sample volumes and structural observation under physiological conditions. The BINDS project of AMED focuses on the introduction of equipment and the training of personnel. The current status of the use of Cryo-EM, including other projects, will be presented.
Meanwhile, we are developing a new method that can significantly reduce the time required for sample preparation, which is the bottleneck of cryo-EM. Epichlorohydrin-modified graphene (EG-grid®) has been developed to enable the immobilisation of proteins by oxidising graphene, which has transparency and excellent mechanical strength. Examples of structural analyses using this tool will also be presented in this talk.

Department of Materials and Life Sciences, Faculty of Science and Technology

DNA is used by all living organisms as genetic material and has excellent properties: it is chemically stable, biocompatible, and has a low environmental impact. Since chemical synthesis methods have been established for DNA, its application as bionanomaterials has been promoted.
Our laboratory has been working on the structure-based design of various functional DNAs, such as a disease-related RNA probe, a mercury-ion sensor, and several DNA-metal hybrid nanomaterials (nanowires, nanoclusters, and nanorods) based on X-ray crystallography. We are also working on structural analysis for RNA-targeted drug discovery as an AMED-BINDS project. 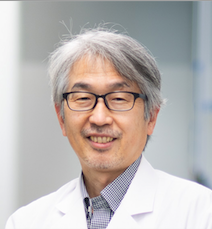 Masato Hasegawa started working on Alzheimer disease (AD) at Tokyo Metropolitan Institute of Gerontology in 1988. In 1995, he joined to Michel Goedert’s lab. In 1999, he joined to Takeshi Iwatsubo’s lab. In 2001, he became a head of department of Molecular Neurobiology in Tokyo Metropolitan Institute of Psychiatry. In 2006, he showed that TDP-43 is accumulated in FTLD and ALS. He has been working on the prion-like spreading of these proteins. More recently, he has contributed to the elucidation of the structures of pathological proteins from neurodegenerative diseased brains.

Accumulation of pathological proteins are defining features of many neurodegenerative diseases, and their spread in brain is closely correlated with disease progression. Tau is a heat-stable microtubule-associated protein, alpha-synuclein is a protein located in synapses, and TDP-43 is a heterogeneous ribonuclear protein. Under pathological conditions, these proteins form filamentous aggregates in neurons and/or glial cells in the brain, inducing neurodegeneration. Diseases with tau accumulation, such as Alzheimer's disease are called tauopathies; diseases with alpha-synuclein inclusions, such as Parkinson's disease, are called synucleinopathies; diseases with TDP-43 inclusions, such as ALS, are TDP-43 proteinopathies. We have been working on biochemical and structural analyses of the proteins. Recent Cryo-EM analysis is unraveling the structures and elucidating the mechanism of the prion-like propagation in neurodegenerative diseases.